Life's too short to spend at the community pool. It's time to put down that membership card, pick up your passport, and fly to Singapore, where the world's highest and largest infinity pool exists at the top of the posh Marina Bay Sands hotel. Get some laps done while taking in a view of the city, 57 stories off the ground.

Make sure you check into the hotel first, though (it's only about $500 a night), as the SkyPark pool is open solely to guests. No one wants to see you getting carted off by the Singaporean police. If you think their punishment of people who chew gum is a tad severe, you don't want to know what they do to those they find splashing around illegally in luxury hotel pools.
No comments:

The Coolest City in the World - Harbin Ice Festival


I hate ice. All it's ever done is make me look like a fool, as a pedestrian and as a skier. I won't even put it into my drinks. This has made for some pretty nasty strawberry daiquiris, but I'm nothing if not principled. That's why I won't be visiting the Harbin Ice Festival in China any time soon, even though it looks CRAZY AWESOME.

Every winter the town of Harbin (also home to a restaurant run by robots) builds an entire city out of ice, using blocks from the nearby Songhua River. Architects from all over the world come to design the various buildings, monuments and sculptures. At night, the ice buildings are lit up in bright, glowing colors. As the event has grown over the years, other attractions for the public have been added, including rides like giant ice slides. Okay, as I type this, my hate for ice is starting to melt a little. I mean, it's one thing to give up ice in my drinks, another thing entirely to ignore the calling of a GIANT ICE SLIDE. ... Don't judge me.
No comments: 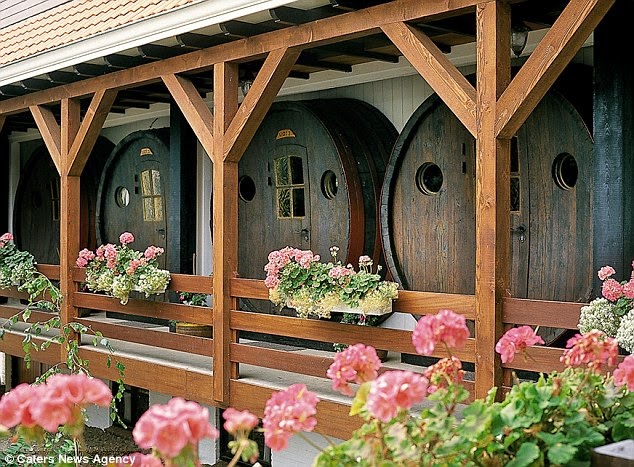 Wine snobs: You may have tasted all of the Bordeaux first-growths, visited every last winery in Napa Valley, and paired your last meal with a triple-digit-priced Cab ... but have you ever slept in a wine barrel? No? And you call yourself a connoisseur. Pfft.

Now you can get a REAL sense of terroir - by checking into giant wooden wine barrels that have been converted into hotel rooms. At the Hotel de Vrouwe Van Stavoren in the Netherlands, guests can sleep in one of four 15,000-liter capacity wine casks. The interiors have sadly been emptied of wine many vintages ago and now contain standard hotel-room furniture, but guests do receive a bottle of red upon check in. So if you consider yourself a true wine lover, you'll set down that glass of Château Frou-Frou and book a room tout de suite. Or you might as well admit that you're actually better suited for beer.
No comments: 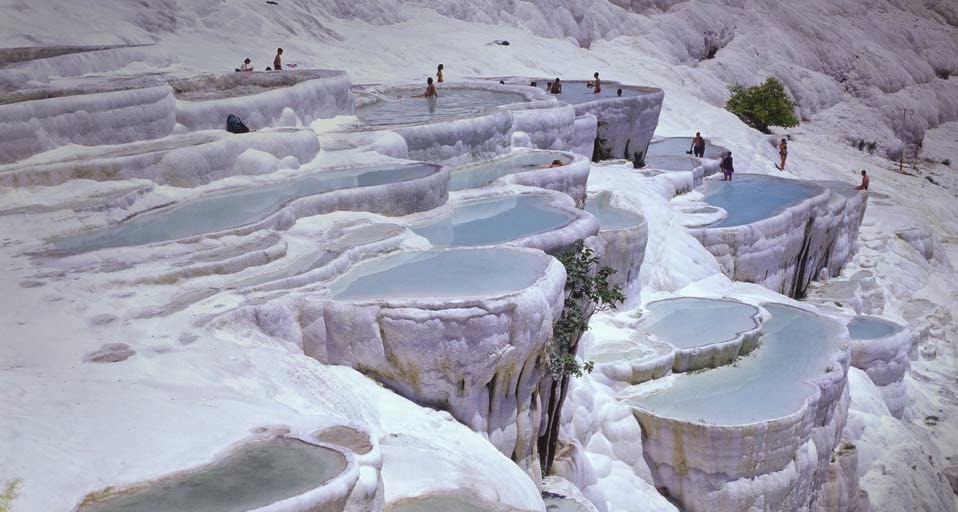 I love hot tubs. Show me a steaming pool of over-chlorinated water and I will happily dive in, then proceed to recklessly ignore the warnings about not soaking for too long. If I am ever rich, my fantasy is to build a house with interconnecting hot tubs flowing from room to room. (Note to self: Patent the idea of interconnecting hot tubs in my latest effort to get rich.)

Or maybe I'll just take multiple trips to what may be the coolest hot tubs in the world, the Pamukkale hot springs of Turkey. Part naturally occurring phenomenon, part Candy Land fantasy, these pools of geothermally heated water sit on terraces made of white travertine and resemble cotton bowls filled with water (pamukkale means "cotton castle" in Turkish). I didn't even know landscape like this existed on Earth - it almost looks like a scene out of Star Wars. I know. I'm picturing Ewoks splashing in the pools, too.
No comments: 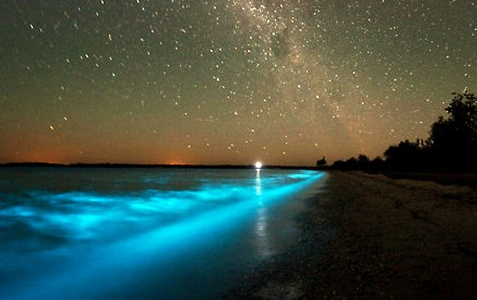 When you're a kid, just about everything can be attributed to magic: Santa Claus, lightning, toilets. But by the time you become an adult, there's not a lot of magic left in the world. Well, that time I found a parking meter with 56 minutes left on it was pretty magical, but that's about the only example I can think of. See, it's a sad state of affairs. Which is why the bioluminescent bay in Vieques, Puerto Rico, is such a treat. It is a truly magical experience, no matter how old you are. You WILL squeal once you kayak through the bay in the dark, or jump into the waters for a swim. The water lights up in a mystical blue-green color every time you touch it. And if you scoop it up for a closer look, you'll see tiny silver sparkles twinkling like fairy dust in your hands.

So what exactly is happening here? I told you, it's MAGIC! Well, magic plus the fact that the biobay is home to tiny, single-celled organisms that light up when agitated. I know. How cute is that? They're glowing because they're mad! And because there are 720,000 of these organisms PER GALLON of water in the Vieques biobay, a bluish glow emerges from the combined bursts of light. But sometimes science can be such a buzz-kill. I say just go. Maybe keep your mouth closed when you jump into the water, though.
No comments: